Zersport News
Home Uncategorized Bayern is preparing transfers. Straight out of the Premier League
Facebook
Twitter
Pinterest
WhatsApp
Linkedin
Only two days remain until the end of the transfer window. Bayern Munich, however, is constantly working on changes in the squad. Germany reports that Javi Martinez may leave the club, but Callum Hudson-Odoi will come. 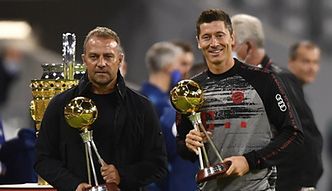 Bayern monachium already has four matches behind him and two trophies (European Super Cup and German Super Cup) this season. The German giant, however, plans to rebuild the composition anyway. In the coming days we can witness at least two transfers.

The club is to leave Javi Martinez . German TV Sky has found out that the Spaniard has received permission from the club to leave. In addition, the Bavarians were to agree to him leaving for free.

The 32-year-old now has two options. One is to come back to his native country and play in Athleticu Bilbao . The second is a lucrative Saudi Arabian club contract Al-Nassr . It is up to him which offer he chooses.

Bayern also intends to strengthen its squad. Apparently, there has been a breakthrough in talks with Chelsea FC on on Callum Hudson-Odoi . The 19-year-old was very keen to go to the German champion in this transfer window and get his own.

English winger at the latest on Monday it is to go on a loan. However, the contract will include a mandatory redemption clause after the season.

UEFA Footballer of the Year. Robert Lewandowski feels great pride. “The most prestigious award in my career”>>

Infection of the Arm Bone, Marc Marquez was hospitalized for longer

One hundred million was not enough. Dortmund declined a lucrative offer...

Toyota is preparing a new powerful version of the famous Hilux...

Infection of the Arm Bone, Marc Marquez was hospitalized for longer